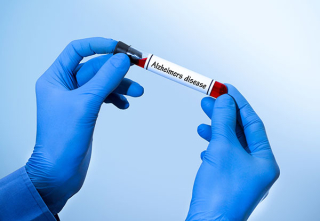 Alzheimer's disease is becoming more prevalent among aging Americans, and there are more aging Americans than ever before. Alzheimer’s disease has three typical biomarkers: plaques of beta-amyloid protein, tangles of tau protein, and loss of connections in the synapses that communicate information between brain cells. Now a simple blood test may be able to detect early signs of Alzheimer’s years before any symptoms, like memory and thinking decline, become apparent. The test involves the identification of changes in levels of NfL a neurofilament light chain protein found in the brain. This protein is part of the internal skeleton and resides inside neurons and brain cells, but when damaged or dying NfL leaks into the cerebrospinal fluid (CSF), it becomes circulated into the bloodstream.  CSF provides essential mechanical and immunological protection to the brain inside of the skull.

Alzheimer’s is the Most Common Form of Dementia

Recent data from the National Institute on Aging Alzheimer’s disease fact sheet estimates Alzheimer’s may rank as the third leading cause of death for older people following heart disease and cancer. It is also the most common form of dementia among seniors aged 65 or more. A simple blood test can detect the future state of you and Alzheimer's but do you want to know? Currently, there is no cure for the disease, and depending on the levels of optimism an individual displays, knowing their NfL status could be a blessing or a curse.

The blood test gives pre-diagnosis years ahead of the onset of symptoms. There is a percentage of seniors who would find this information disheartening and feel burdensome and full of worry for what is about to come. These individuals can receive protection from knowing at their request if the information would make them fearful and angst-ridden. Other seniors might want to have a pre-diagnosis to relish the time that they have left with full faculties. They may want to get their affairs in order, handling day to day living choices and extension of life choices when they are no longer mentally competent to do so. Many components divide the two camps of thought; wanting or not wanting to know. Family structure, faith, financial independence, education level, and general health and well being typically play a factor in the decision.

What of the family who may want or may need to know of the future advent of Alzheimer’s to plan for the care of their spouse or parent? As a spouse and as a child, it is crucial that medical directives be in place for when their loved one can no longer make a sound decision but can be comforted by the fact that they participated in the planning years before. A spouse must prepare when their loved one enters a full-time care facility they may no longer recall their marriage and their spouse and unknowingly, may strike up a "relationship" with another resident. Retired Supreme Court Justice Sandra Day O'Connor encountered this with her husband and famously became involved in raising awareness of Alzheimer's disease. Subsequently, she was diagnosed with Alzheimer’s disease in 2018 and retired from public life.

Reasons to Establish a Biomarker

Outside of the emotional realm of not having an Alzheimer’s stricken spouse or parent recognize who you are there is a substantial financial component to caring for individuals with Alzheimer's. For practical and economic reasons, a family should be able to establish the biomarker for a loved one's likelihood to develop the disease through this simple blood test. To that end, health information is private and protected by law. To ascertain your spouse or parents’ risk of Alzheimer's requires conversation, acceptance of the blood test, and careful planning with elder counsel for proper legal documentation.

Our team is always available if you have questions or would like to discuss planning opportunities to address your health care needs.